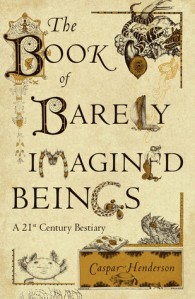 From the Axolotl to the Zebrafish, our planet contains a host of barely imagined beings: real creatures that are often more astonishing than anything dreamt in the pages of a medieval bestiary. Ranging from the depths of the ocean to the most arid corners of the land, Caspar Henderson captures the beauty and bizarreness of the many living forms we thought we knew and some we could never have contemplated, inviting us to better imagine the precarious world we inhabit.

A witty, vivid blend of cutting edge natural history and meditative reflection, The Book of Barely Imagined Beings is infectiously celebratory about the sheer ingenuity and variety of life.

The Book of Barely Imagined Beings is subtitled ‘A 21st Century Bestiary’ and that’s what it is; not a natural history book, not an encyclopedia of animals, a bestiary – an odd fusion of science and navel-gazing. While in a medieval bestiary real and mythological animals were used as symbols for human virtues or vices, in this book real animals are used as starting points to examine wider issues about how human’s relate to both the world and each other. So the Axolotl entry looks at the Spanish conquest of Mexico, the Gonodactylus examines the scientific evolution of the eye, and so on. It’s a unique and very interesting approach, but one that doesn’t quite hit the mark in every entry. In the spirit of mimicking of medieval bestiaries the book has also been gorgeously designed; there’s gilding on the cover, a full-page illustration and illuminated capital letter for each animal that incorporates the major themes of the entry, and (best of all) marginalia. It is, quite simply, a beautiful book. And not only beautiful on the outside but unique on the inside.

So how did it miss the mark on some of its entries? Well, as admitted by Henderson himself in the introduction, some of the metaphors tying the animal to a wider issue are a little strained – such as the Venus Girdle entry where ‘I also want to make a case for these scintillating bodies of rainbow-light as an emblem of orgasmic beauty as a whole’ then flows into a discussion about scientist’s aversion to studying the orgasm and enjoyment factor in sex when looking at animal reproduction. Interesting as both Venus Girdles  and human attitudes towards the orgasm are, it’s a pretty tenuous link at best. Another entry about crabs had a bizarre analogy to robots in that left me blinking at the page waiting for it to explain. Other chapters seem a bit unevenly weighted, again acknowledged in the introduction (‘Some of the analogies and digressions I have followed have little to do with the animals themselves’). There were a few that moved on from the animal – which I’m going to admit was the main thing I was interested in – a little too quickly for my liking, leaving me going ‘wait! But I didn’t learn anything new yet!’.

Henderson is obviously passionate about animals, zoology, and conservationism, he writes in the first person about several of his own experiences with the animals he mentions. His writing style is easy to read and the science is (mostly) presented in a way that I could absorb and understand. I was disappointed to find, when doing a bit of research myself, that one American church he sites as believing Jesus co-existed with dinosaurs and pterosaurs is actually (probably) a parody – nobody on the internet seems to be able to tell 100% whether they’re real or not, so I guess it’s fair enough to mention them, but the omission that many believe it to be parody was either disingenuous or not well researched (that whole chapter was a bit odd actually). On the science, the animals, and his own contemplations though, he is a lot better.

A very interesting, and very unique, book. I found something to enjoy in every entry and it is presented absolutely beautifully. Not one to pick up if you’re just after the nitty-gritty science facts, or only want to hear about animals and don’t really care for the author’s tangents. But if you think the idea of a modern natural history text written and presented in the style of a medieval bestiary sounds pretty awesome it might be worth checking out.